Malware: Into the fear landscape 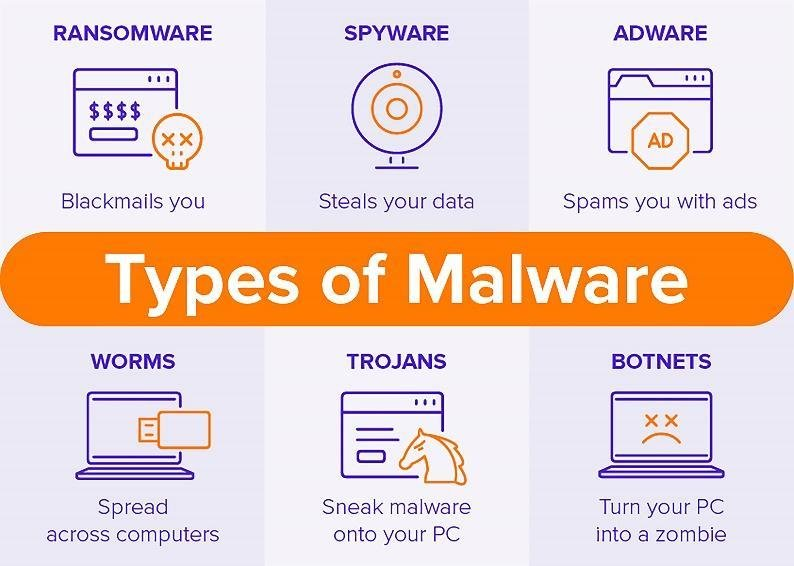 Adware- These types of malwares are at the back ends of advertisements that are displayed whenever an user visits any website. Lot of people tend to visit a website and adware possesses a threat to all of these. It generally showcases fancy discounts or facilities thus demanding clicks for further procedure. Adware is a software that generates these kinds of advertisements. Abnormal functioning of your web browser indicates the advent of an adware. Unnecessary Display of advertisements also gives an indication of an adware running at the backend. It comes into action when any of the visitors click on the banner of advertisement. Clicking on these advertisements results in malicious codes leaking in your systems and possessing a threat to one's proprietary information. Beware of ads.

Spyware- A malware that infiltrates into one’s computers, systems without bringing their advent into the victim’s notice is known as a spyware. A spyware, like all other malwares, aims at disrupting one’s systems and gaining unauthorized access to it. Spywares are used for stealing personal information, stealing identities, keeping a track on one’s internet usage, banking details, passwords and other malicious activities. Later, all the information gathered can be sold into the black market in order to get a handsome price for the theft. They are like spies that are always behind the victim tracking their activities and misusing it.

Worms- A computer worm is a malicious software that can transmit its copies from computer to computer via a network. It is known as a standalone malware because it replicates and makes copies of itself without any human intervention. Worms are generally sent by the attackers with the help of spam emails that usually contain attachments or hyperlinks to malicious sites, clicking on which can lead to automatic download of a worm into one’s system. A worm then replicates itself and spreads from one computer to another on a network. The aim of introducing a worm into victims systems can be disrupting the network on which the victim is, gathering personal information of the victim, disrupting his systems, giving the access of the victim’s system to the attacker, injecting malwares into the target system. The most well known being the Stuxnet worm.

Trojan horses- Also known as Trojan virus, are malicious pieces of codes that look like they are legitimate but are not. On downloading them, they start performing the task that they have been designed to perform. Trojan viruses cannot replicate themselves hence Trojan virus is a misnomer. An email containing Trojans as attachments are generally emails that masquerade as emails sent by legitimate institutions and the attachment contains an important document of the victim thus luring individuals to download or click on the hyperlink. This deceiving act is generally used for injecting Trajan horses into the victim’s systems. A trojan like all other malwares can perform activities like identity theft, stealing proprietary information, disrupting computers, networks, etc.

Botnets- Botnets are connected computers used for looking after the smooth functioning of a website. There can be malicious or illegitimate botnets as well that can be used for performing malicious activities over the internet. With the help of Trojan horses a malicious software can be incorporated into the victim’s machine that can give access to the victim’s system to the attacker. This can also be done by direct hacking of the victim’s systems or with the help of specialised programs that crawl across the internet looking for security holes (such programs are known as spiders) which when found will be automatically hacked by the spiders.

Cyber attackers employ different and novel techniques everytime so as to break through the security shell and gain access. A malware is a software or a program or anything that leads to the execution of a malicious activity. Every novel technique employed by the attackers for malicious purposes will be enlisted in types of malwares. Therefore, malwares and its types is an endless topic and will go on. The only thing to keep ourselves safe is to take timely precautions and beware. As its rightly said, prevention is better than cure.